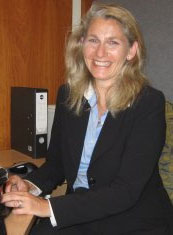 Our Principal, Jacqueline Dahl, is an experienced criminal lawyer committed to providing you with a reliable personal service throughout your criminal proceedings. She understands that a criminal matter is for many people one of the most stressful and emotional times in their life.

Jacqueline graduated from Sydney University with a degree in Arts (BA) and Law (LLB). She was admitted to practice in NSW in 1985 and admitted to the California Bar in 1988.

Our Principal began her criminal legal experience as a prosecutor working for the District Attorney’s Office in Orange County and Santa Clara County, California. During her career Jacqueline has been the responsible prosecutor in many matters before the California Superior Court and the Children’s Court. In this role she ran numerous jury trials as well as judge- alone trials in a large range of offences which included: all types of assault offences, traffic matters, property offences, drug offences, break and enter, sexual assault, domestic violence, gang related crimes, weapons, kidnapping, attempted murder and manslaughter. In NSW Jacqueline has worked as a criminal defence lawyer conducting defence proceedings in numerous courts, including: Local Court, District Court, Children’s Court, Supreme Court and Coronial Inquests. Her practice extends to state and commonwealth matters and appellate work.

Jacqueline is active in both private and public representation, including being registered with the NSW Legal Aid Commission on several panels (General Criminal Law, Children’s Court, Criminal Duty Lawyer and Specialist Domestic Violence Practitioner Panel). She believes in being approachable and communicative with clients.